This time of the year is when all private investors who invest directly in the market should be reviewing their investment performance over the past year. If you can’t do better than the professionals (after costs) then you might as well let them manage your portfolio. So when it comes to the year end I work out the data and look at where I made and lost money (as a learning exercise).

Let me first explain that I have a very diversified portfolio and I simply aim to beat the FTSE-AllShare as a benchmark. It is diversified both in size of company and market sectors. This was the breakdown of my holdings recently:

The result was a Total Return of 22% for 2017, which compares with the FTSE-100 increase of about 7%, FTSE-250 of 14%, FTSE-AllShare of 9% and FTSE-AIM of 33%. Clearly I would have done even better to have invested solely in AIM shares but that would have meant an overall portfolio very concentrated on smaller companies (particularly bearing in mind that some of the Funds/Trusts and all the VCTs invest in smaller companies).

The overall portfolio dividend yield was 3.9%. The reason why this is so high is partly because the Venture Capital Trusts (VCTs) paid out large dividends, but these actually showed capital losses during the year – apart from a couple of AIM VCTs. That just shows how the market drove up AIM shares last year, because AIM VCTs are often tricky investments because of their propensity to take up IPOs. Other VCTs showed a preference to turn capital into tax free dividend income because of the rules they have to adhere to that stops them retaining cash and a desire to “recycle” capital so investors get more tax reliefs.

National Grid also used the “consolidation” trick to turn capital into dividends following a major disposal which affected the numbers slightly, but otherwise also lost value no doubt because of investors’ worries about the threat of nationalisation or more Government interference if Corbyn gets into power.

Lots of my big winners during the year were the most popular AIM shares – technology and internet stocks – I won’t name them for fear you’ll all be piling into them even more as seemed to happen in the last few days of 2017, and at risk of talking about my own “book” which will lead to recriminations when one or more come unstuck. But there were a few larger winners – Persimmon and Greggs for example – which were both big losers in the previous year. I sold Berkeley Homes at the start of the year which was a mistake although that was partly offset by investing in Telford Homes (an AIM stock of course). Apart from McColls (a convenience store chain), retail shares were out of favour so Dunelm was a big loser. Property companies did surprisingly well so my holdings in Segro, Tritax and TR Property Trust did better than everyone was forecasting for the year. I did invest in some investment trusts with large international exposure which helped the portfolio performance because of the fall in the pound.

Needless to say, it may be wrong to change one’s investment approach simply based on the results of one year, particularly when the market seems to be so buoyant in certain sectors. Is the market going to crash in the near future as some have predicted? Who knows – not me. Should I pile into more AIM shares that have been driven up by momentum traders? You can do that but I won’t because the chance of getting out at a decent price if a crash did occur in small cap shares is small. I still look at the fundamentals of companies and I have been limiting my exposure to some of the AIM shares in my portfolio because revenue growth can only be worth so much. Cash flow and profits are also important. I only try to hold AIM shares where the business has quality and a longer-term future. That way you can ignore short term fluctuations in the share price, and avoid big tax bills unless you trade only within an ISA or SIPP.

Some shares and sectors certainly look overvalued at the moment, but that is always the case. US stock markets are probably of more concern in terms of valuations than UK ones, but if the US crashed then so would the UK and other markets soon after – they are now globally synchronised. So I am holding a moderate amount of cash at present which probably reduced my portfolio performance last year to some extent. I’m just waiting for those buying opportunities, but they may not come any time soon. It’s a “bottom up” strategy rather than “top down” so if shares at attractive valuations appear, I’ll buy them.

One of the biggest news items in the last few days was the submission of a requisition for the appointment of a Shareholder Committee by ShareSoc and UKSA at the Royal Bank of Scotland (RBS) – a photo of ShareSoc director Cliff Weight outside the RBS offices is shown below. 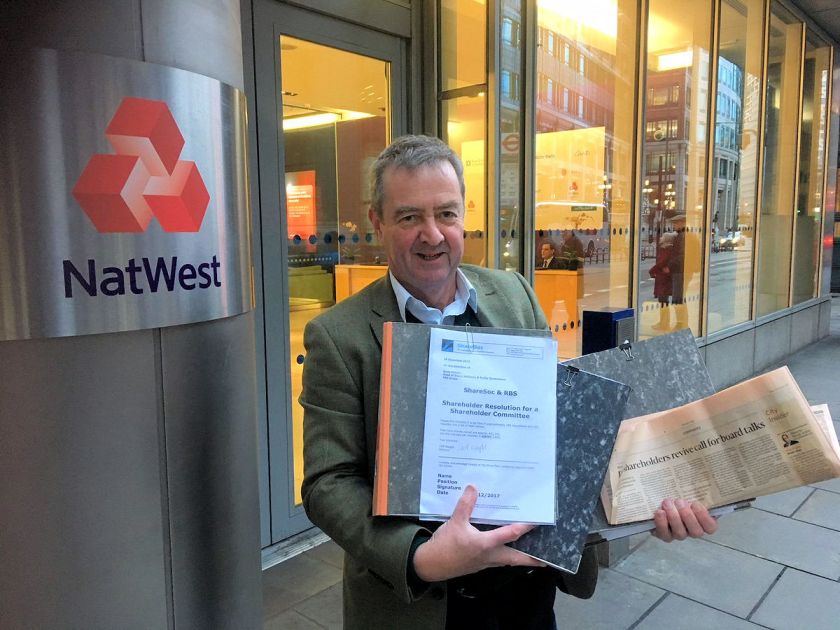 This is of course the second year that such a resolution has been submitted for the RBS AGM. Last year it was rejected by them on what I consider spurious grounds. Let us hope they accept it this year because the ability to add resolutions to meetings (or requisition General Meetings as per the recent event at the London Stock Exchange, the LSE) is a fundamental element of shareholder democracy in public companies. If that part of the Companies Act is ignored it means directors can do what they want. The LSE had the good sense to accept the demand for a vote on the Chairman, let us hope that RBS do likewise.

Incidentally, the LSE directors and Mr Rolet, who they accused of being other than a team player, would do well to read a book I reread over Xmas – “How to Win Friends and Influence People” by Dale Carnegie. I read it first many years ago but had forgotten what it says (when my wife noticed I was reading it she said I should have read it 30 years ago and I had to admit I had done so). The first lesson in there is “Don’t criticise, condemn or complain”. But it’s a good read anyway, both amusing and well written, particularly if you are looking for some self-improvement.

To get back to the events at RBS, if Cliff manages to persuade RBS to accept the resolution, and can then persuade the Government to support the resolution (they have enough votes to swing the outcome) this will be a major achievement. It takes a lot of effort to pursue such campaigns as I know myself. I would suggest we should nominate him for an “Honour” if he achieves his goals – just go here for how to do it: https://www.gov.uk/honours

That thought came to mind when I was reading the New Years Honours List in the FT (not that I am in the habit of perusing the list but there was not much else to read over the Xmas holiday). One surprise was the award of an OBE to Suranga Chandratillake, for “services to engineering and technology”. He was a former director and founder of controversial company Blinkx (since renamed RhythmOne) – or as the FT said – a company whose market value has been volatile since its IPO in 2007. Mr Chandratillake remains on the board as a non-executive director having stepped down from being CEO some time before the furore over possible misleading stats reported by internet advertising companies blew up. Still public Honours may not be awards for success – just consider the award to Nick Clegg. I had better not say anymore otherwise I will be unlearning the lessons from the above book.

You can “follow” this blog by clicking on the bottom right.

© Copyright. Disclaimer: Read the About page before relying on any information in this post.